Manzano Mountain Review is an online literary journal out of central New Mexico.  Thank you to its editors Justin Bendell and Kristian Macaron for publishing my ramble of a road trip poem drafted along the Cassiar a few summers ago.  If you’re into wilderness writing, “Road Trip” is in good company.  Savor.

Thank you to Sparks of Calliope‘s editor Randal Burd for walking into November with “Solar Flare,” my riff on Mary Oliver’s “Wild Geese.”  It is here I am in fine company as fellow poet and AWS editor Ray Ball has published her poem, “Return.”  In the spirit that the writing community can sometimes mirror Alaska in the idea of ample ground and many connections, Randal Burd is poised to release his new collection of poetry with Kelsay Books, Memoirs of a Witness Tree, in spring 2020.

I am so grateful to end this week of shortened daylight and lengthened classroom hours with a poem published by Peatsmoke Journal.  Editors Bess Cooley and Wendy Wallace strive to “give readers a place to find exciting new work that inspires, stirs, surprises, and sparks the empathetic imagination.”  I am thankful when my work finds its page.  “Prayer for the Wildness” is in good company.

Last summer, I received an email from writer Rob Mclennan who runs a blog called “my small press writing day” modeled after The Guardian’s occasional feature, “My Writing Day.”  He wondered if I’d be interested in writing an entry.  Interested?  Yes!

So his email sat in my inbox through August, September and now through the first autumn storm in October.  Last weekend the winds creaked the house, the rains swarmed the windows and I sat down to write.  The end result with photos of my writing space published this week:  Writing in the House of Fall.  Thanks, Rob! 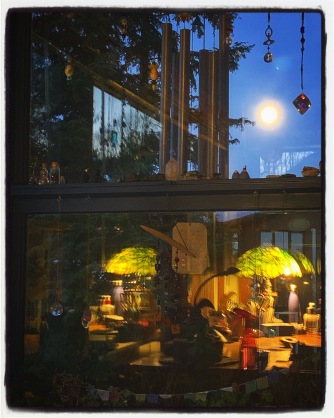 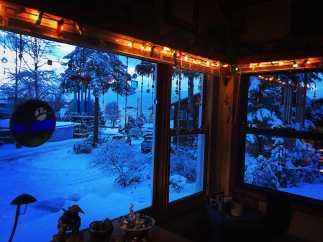 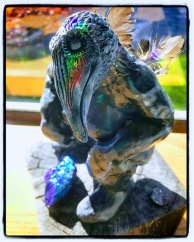 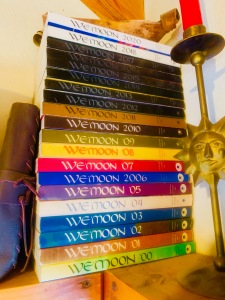 In my moon of all full moons, I love finding a home for my poems in We’Moon.  Once, an entire poem of mine was published, titled “From One Good Year to Another.”  I wrote it in 2011 and it published in We’Moon 2014:  Radical Balance. What made its publication especially special is that the editors placed it as the final poem of the year.  That particular New Year’s Eve was blustery.  Bruce, Rie and I were hunkered down at home lit by twinkle lights sparkling against rain splattered windows.  I received a Facebook message that night from beloved poet, UAA MFA faculty member, teacher, sage, amazing human Eva Saulitis who, from another island in the Pacific (albeit warmer – Hawaii) and taking one last look at her own copy of We’Moon for the year, inquired if I was indeed the poet behind the poem.  I was!  I am!  It was a sweet and memorable exchange of New Year greetings, well wishes and writing encouragement all bundled up into a stormy night of one year’s end and another year’s beginning.  But this moment also taught me that when you read a poem that grabs you by the heart, you need to engage in some outreach, either let the poet know or post a good word, a review of the work and share the word with others. 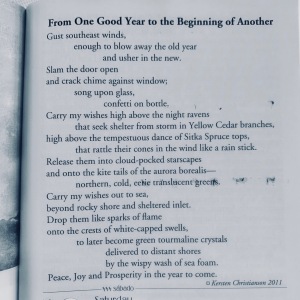 This year, again.  I am over the moon that the editors have included an excerpt of my poem “For Gloria” in We’Moon 2020:  Wake Up Call.  Just six lines are included, but the poem is placed in the opening of the issue, next to Earth Dancer’s “Call It In.”  I can’t know what in three months’ time I’ll be hoping to call in for the year to come.  Without a doubt, the last two autumns have served up so many painful challenges:  dark followed by darker yet, but the darkest has been losing Bruce.  I plow through the season with fall-scented candles, lots of Vitamin D and a SAD light to push me through these months ahead.  So this news of once-again publication, another round of merry, makes my heart light.

Thank you, We’Moon.  Thank you. 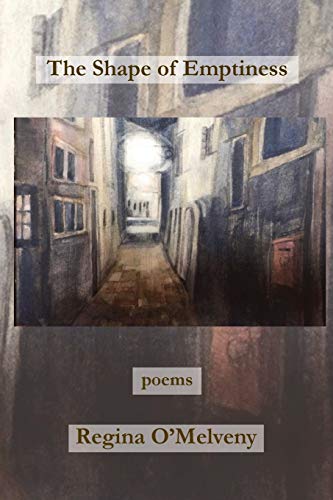 From end of life to hope in life, O’Melveny’s collection (Sheila-Na-Gig Editions, 2019) explores the hardships and loss of one generation to the hopes placed in another. At the core, the speaker dealing with the loss of a long-absent father, the death of a mother, the buoyancy in her relationship with her own husband and daughter.

“Grazia’s Teeth” explores a grandmother’s handling of a child’s baby teeth collected and hammered into the grooved wood of a door, likened to “tiny shells, / pearl mushrooms in gray wood, / or half-moons that rise…” In the end, the speaker reflects how her own daughter “…still has teeth / to lose and lives by magic.”

This cyclical, lyrical read will, at times, leave you breathless. From her poem, “Three breaths”

one breath to take
the measure of things
and one breath to carry
down into the yielding
lungs of the sea – a bell
of breath, a lantern of air.

It leaves me to contemplate not only the magic we encounter when brushing up against the wild of the natural world, but the magic we carry within.

Thank you to Editor Sandy Benitez of Poppy Road Review for running “In the Park” on this fine first of September.  It’s the perfect way to initiate a change into autumn, especially after a night of music on the dock at the net mending shelter and a knockout display of aurora borealis. 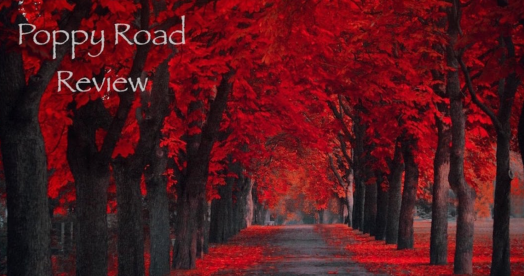